Lizard’s Point in Cornwall is the furthest place south in the UK. This piece was shot on Super 8 film before being digitally remastered. The polaroid photographs were shot on location at the same time as the film, whilst the sound is a recording of the projected Super 8 film as it was being copied. With minimal digital corrections or editing, the piece retains an authentically traditional aesthetic. As new technologies emerge it can be an overwhelming experience to remain in-line with modern developments. Employing older equipment, therefore, allows for a refreshing simplicity of use that is as liberating as it is nostalgic – factors echoed in the exploration of Lizard’s Point, a place liberated from utilitarian function and fully imbued with nostalgic appeal.

The coalescence of photographs, moving images and sound in The Lizard builds an environment wherein the viewer can engage with elements in combination or independently, much as they might if they were physically present at Lizard’s Point. And yet, although interlinked and cross-referential, the media remain separated in their placements, resolutely detached, a statement emphasising the broken and isolated nature of the subject. 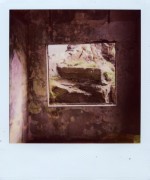